Posted on February 9, 2019 by haeleyreeves

Why keep chickens, apart from helping you to weed the garden and undertake pest control, you can eat them, eat their eggs, use their feathers for fly fishing. The Gallus Gallus is your gardening friend.

Our chick companions however, need a little more care than most people realise.
Apart from every predator trying to take away your resident garbage disposal unit, there is an array of pests and diseases that you need to be mindful of.

Firstly a secure roost, that is easy to clean – so my first choice is metal and movable. So that a quick blast from the power washer and a spray of disinfectant is the cheapest and quickest way to keep on top of a number of basic pathogens.

Collect your eggs every day and put in plenty of sawdust, to help keep your eggs clean. 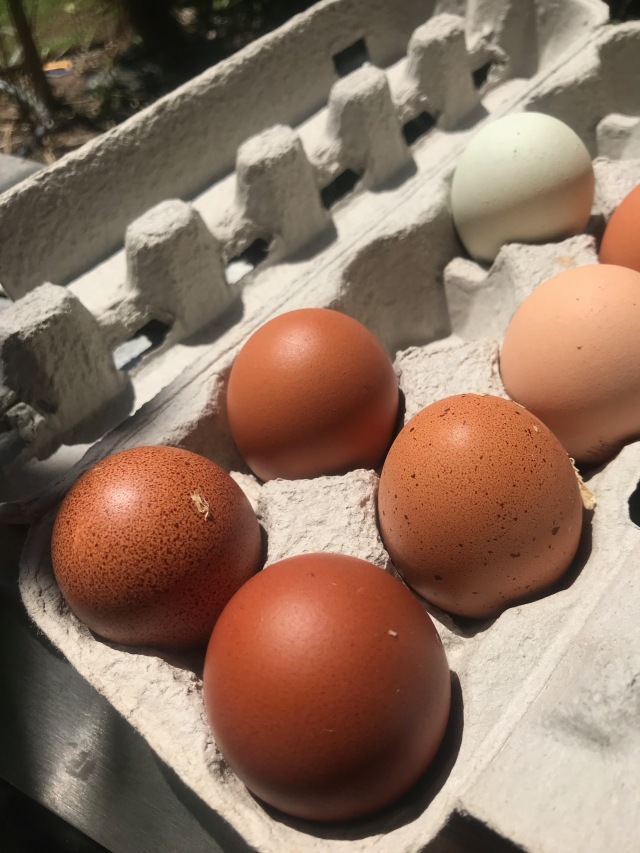 As the summer progress’s the need to be cool comes to the fore. Our tin roof, did not have any ventilation to the outside, so rather than pay a builder, we picked up 4 whirlybirds from the local builders merchant and installed them at equal distance across our roof. Then at regular intervals on the underside of the eaves, vents with a grill to allow airflow from the bottom and out thru the top. As you know hot air rises, so hopefully our house will be a few degrees cooler. Next on the list is insulation batts in the roof, only after all the electrics have been checked, we don’t want any accidents or fires. This way we hope to drop the average temperature in the house down by a few degrees without the use of air conditioning. If we had more time and money, we would remove the outside wooden cladding and install insulation in the walls, followed by double glazing. Both of these would help to keep the heat out in the summer and the warm in on the winter.

Having plenty of water on your property makes the difference between having navy style showers and watching every last drop, or the luxury of a nice long bath.

We had one galvanised 22,000 litre tank in working order, one unusable galvanised tank and two 10,000 litre plastic tanks when we moved in.  Only the galvanised tank was supplying the house, this gave out in the flood of 2011, as the it had not been build on firm foundations, they all washed out.  22,000 litres when down the hill during the night, no wonder I dreamt of white rapids, as it was not far from my bedroom window.  The only choose we had was to use the two plastic tanks, and my goodness couldn’t you taste the plastic!  It was horrible, and I was not going to drink that for long.  It even made the shower water smell strange, I thought I was going to turn into plastic.

So I set about researching costs to replace the tanks, to cut a long story short, we settled on Stainless Steel.  Concrete eventually cracks and needs maintenance and is lined with plastic anyway.  Galvanised again would corrode eventually, so we settled on Stainless.  The cost in the end was pretty much the same as plastic, as we found a local manufacturer, ordered 3 and paid cash.  The big cost however was getting a huge concrete slab put in to ensure that these tanks we not going anywhere.  As our property is on a gentle slope, a retaining wall to the back of the slab was added to help keep the huge car port foundations in one piece.  It also meant that the tanks were directly below the huge catchment of the carport roof.  With first flush added to all the down pipes, we hoped to get nice clean plentiful rainwater.  Our capacity was now 22,000 x 3 = 66,000 and I had calculated that we had enough rain each year to collect twice that amount, but based on what we used, 66,000 would be plenty.  After installation, we ordered 10,000 to put in the tanks so that in the event of a strong wind they would not move.  We did not order anymore water until 2014 after more than 9 months of no rain thru one of the driest years to date.

Our tanks are currently full thanks to Ex- tropical Cyclone Marcia, but we are still mindful to watch every drop as we could have another very dry winter.

I grew up a townie and only moved on to acreage 5 years ago, this is when I first learnt of the responsibility of having a septic system. No longer was it the water authority responsibility to take away my effluent to some far distant sewage works.   The property we purchased had not been maintained and one of the first things we were to discover was that the persistent aroma was not caused by local wildlife, but a rather overflowing tank, right outside our bedroom window.   So we looked in the local newspaper for a solution. The next day out comes a large tanker to remove our pungent pile which was to be one of the worst tanks, our soil man had ever come across. Apparently the thick gluppy topping is not meant to go all the way to the bottom of the tank. This is a clear indicator that it is way overdue to be emptied. The baffle was broken and needed repair in the main tank, and also an attempt was made to suck out the transpiration pits. We knew were they were, by the long green luscious patch of grass. I also learnt, that I had to be very careful about what I put down the sink, toilet and shower. Toilets only use non bleached paper and as little as possible so that it has more chance of breaking down. (Try to get a 6 year old to go easy on the loo roll – lol) So the next day my trip to the supermarket established that there are several brands suitable including own brands such as Coles ( I rang their customer service to confirm as this was not clear on the packaging, another one of my annoyances not to have a clear septic safe logo that is nationally recognised) the dull off white colour of the paper indicated to me that it was not bleached, so was a worthwhile exercise to find a cheaper brand than SAFE. Not as soft according to my husband, so you know who did the shopping last week in our house, by the brand in the bathroom. Then I went looking at Washing Liquid and Dishwasher Powder, there are clear brands that state they are suitable for septic, without all the nasties EcoStore etc, now 5 years later Woolworths and Coles have started to introduce their own brand. Lastly I looked at shampoo, conditioner and shower gel and soaps, again I found myself with the same brands Earth, Organics etc. I also turned to Green Cleaning to make up some of my own cleaning products, with Eucalyptus and White Vinegar a firm favourite. I also discovered you can put lime down your toilet to balance out all the acid wee and to help give it a clean. There are also bio activator products both liquid and granular to get good bacteria into your septic to break down those solid lumps. Finally never ever put bleach anywhere near your sanitary chinaware, a sure way to kill off those flourishing flora in your tank. Oh and don’t leave it too long to get the soil man in, depending on your household (average of 4 to a family) approximately 3 years at around $320 a visit, that is around $106 a year.

So you see life begins from the bottom up, if your septic and grey water are not looked after, life can become one big stink!

So you are no longer on the mains, it is your responsibility to ensure that the water you drink is:-

Within the first few weeks on moving we discovered the issue with option 1.  My daughter developed a stomach bug, not the ordinary kind that is gone within 24 hours, the sort that hits you unexpectedly and lasts for several weeks, but seemed like months.  Along with it came vomitting, so the joys of tackling both ends of a sick child became an art form, to ensure the minimum of clean up.  She became very good at target practice.  We went looking for ways to clean up the water, we were drinking from our galvanised tank.  Initially we made sure everything was boiled, but that is rather tedious, so we went looking for a filtration system.  To get one professionally installed with 3 types of filter, 1 meter of ultraviolet light, an alarm and controls was approximately $5,000.  Until we hunted across the web for an all in one unit that you can easily fit yourself from around $1500 http://www.cynortic.com.au.  Fitting the unit was straight forward, screw to the wall, connect the water and plug in the electricity. Changing the filters every 3 to 6 months was pretty easy.

The first issue we encountered was the 1 meter ultraviolet bulb which kills off bacteria and other nasties. The bulb sits inside a long glass tube to separate it from the water, it looks like a very long test tube.  So not only did we have to replace the bulb but the cracked glass tube. We then needed parts, unfortunately the local distributor we had purchased the unit from was no longer in business, so we had to get parts from Western Australia.  It meant rigging up the unit to work without the bulb, whilst we waited for parts.  The bulb was poorly packed and was broken, so we had to get another one sent, I asked for 2 so we had a spare.  They happily replaced the broken bulb free of charge.   Then we had issue with the electronic controller unit, and when we went to contact the people in Western Australia they were no longer supplying and we had to go direct to New Zealand.  New Zealand replaced the unit under warranty, with a newer model which had extra functions, so it took a few emails back and forth to establish not to connect this wire to anything else.  The unit uses standard paper and carbon filters which can be purchased in most plumbing and irrigation places, it is worth shopping around as the price can vary considerably.   My daughters bad tummy did eventually disappear, my kids  understand how essential it is to safe drinking water even for first world countries. 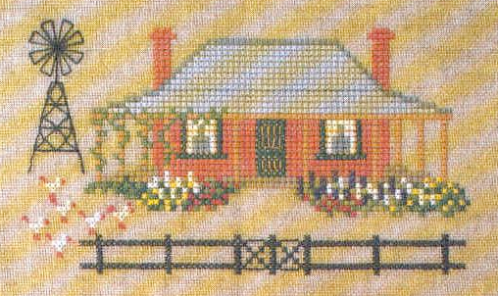 I always wanted my own place to keep all the animals I wanted, grow the plants I dreamed of and enjoy nature’s wildlife.  However I soon discovered what demands of time, money and sheer physical strength is required, to keep your few acres up and running.  I have learnt a few things along the way and hope to share some of my lessons with like minded nature lover’s.